Jesus, Saddam Hussein went out with more dignity than this.

Oh look, here's Thomas Frank, perennial winner of the Ian Malcolm Award for Political Commentary* back in the Guardian again, shouting the blindingly obvious into the howling void.

I have been narrating our country’s toboggan ride to hell for much of my adult life, and I can attest that Biden’s triumph by itself is not enough to bring it to a stop. It will never stop until a Democratic president faces up to his party’s mistakes and brings to a halt the ignoble experiment of the last four decades.

Yeah, well, good luck with that. These are after all the idiots who thought Biden would be good for down ticket candidates, when his whole strategy was to persuade disaffected GOPers to vote against Trump, while cheerfully ignoring the obvious question - why on Earth would they vote Democrat in any other race? And the idiots now arguing the failed campaigns of "centrists" are the fault of the progressives who won. But of course it makes perfect sense to construct a national election strategy around the question of whether it might spook some paranoid ex-Cubans in America's wang.

* It's a statuette of a young Jeff Goldblum in a leather jacket, with the inscription around the plinth: "Boy do I hate being right all the time." 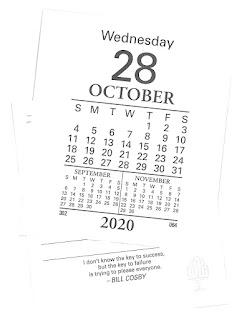 *Different brand this year. It must be endemic.

It is not people like the Abbie Hoffman of The Trial of the Chicago 7 — those who dare to memorialize the troops and celebrate our institutions while critiquing them within reason — who are most essential to a thriving democracy. It is people like the actual Abbie Hoffman, who could never have been the subject of an Aaron Sorkin film, because Sorkin would never have been able to get a square liberal audience to like him.

Apparently, but unsurprisingly, the new Chicago 10 flick isn't very good, taking place, as it does, in the alternative history magic pixie land that is Sorkinworld. These two are better, or you could just read the transcript.

Still, let us genuflect before the superhuman perversity of the thing. Tax cuts, union busting, and deregulation - the historic achievements of right-wing populism - have led us straight back to the massively skewed economic arrangements of the 1890s. It takes a kind of hallucinatory bravado to call yourself a populist while cracking down on workers and ignoring antitrust laws, which the Reagan administration and its successors did. It's like a banker calling himself a freedom fighter because he likes Basque cuisine. It's like a slumlord signing his eviction notices, "Yours in solidarity."

- Thomas Frank, from "The People, No!", Chapter 7 (for what it's worth, my copy is the Scribe edition with the tiresome alternative title People Without Power)

I'd have to toss a coin to choose between my two favourite moments from that trainwreck:

Trump pronouncing "Antifa", slavishly followed by Biden, like it was an island in the West Indies (AnTEEfah).

Biden shoehorning in a reference to Trump's alleged reference to WW1 dead as "losers" by pretending he was misremembering Trump's attacks on his corrupt druggie son Hunter as being attacks on his brave veteran son Beau: that's a courageous stratagem for a guy the GOPers are keen to paint as senile.

Jared Diamond notwithstanding, there is absolutely no evidence that top-down structures of rule are the necessary consequence of large-scale organization. Walter Scheidel notwithstanding, it is simply not true that ruling classes, once established, cannot be gotten rid of except by general catastrophe. To take just one well-documented example: around 200 AD, the city of Teotihuacan in the Valley of Mexico, with a population of 120,000 (one of the largest in the world at the time), appears to have undergone a profound transformation, turning its back on pyramid-temples and human sacrifice, and reconstructing itself as a vast collection of comfortable villas, all almost exactly the same size. It remained so for perhaps 400 years. Even in Cortés’ day, Central Mexico was still home to cities like Tlaxcala, run by an elected council whose members were periodically whipped by their constituents to remind them who was ultimately in charge.

Possibly not the most interesting paragraph of Graeber and Wengrow's How to change the course of human history (at least, the part that’s already happened) - that's more likely to be the discussion of seasonal variation in prehistoric political structures, or the article's various vigorous myth demolitions - but certainly the one that made me laugh.

GPT-3 produced eight different outputs, or essays. Each was unique, interesting and advanced a different argument. The Guardian could have just run one of the essays in its entirety. However, we chose instead to pick the best parts of each, in order to capture the different styles and registers of the AI. Editing GPT-3’s op-ed was no different to editing a human op-ed.

Which explains why this op-ed written by a computer program proceeds through a series of non-sequiturs to make no coherent conclusion, in case you were going to blame the poor AI for the Guardian house style.

I have a dream. It's not a big dream, it's just a little dream. My dream - and I hope you don't find this too crazy - is that I would like the people of this community to feel that if, God forbid, there were a fire crisis, calling the fire police department would actually be a wise thing to do. You can't have people, if their houses are burning down there's an emergency, saying, "Whatever you do, don't call the fire police department! That would be bad."

C. D. Bales, from Roxanne, in the original, of course.

If pandemic related lockdowns, and the consequent paradigm of essential workers, has taught us anything, it's how right David Graeber was. Appallingly, I have to say 'was' now.

every time you see a photo of prawns in a recipe book, they are almost certainly the same six prawns

LRB Bookshop's Twitter feed with a work of bioluminescent genius.

BrainEx pumped an experiment solution into the brain that essentially mimic blood flow. It brought oxygen and nutrients to the tissues, giving brain cells the resources to begin many normal functions. The cells began consuming and metabolizing sugars. The brains' immune systems kicked in. Neuron samples could carry an electrical signal. Some brain cells even responded to drugs.

The researchers have managed to keep some brains alive for up to 36 hours, and currently do not know if BrainEx can have sustained the brains longer. "It is conceivable we are just preventing the inevitable, and the brain won't be able to recover," said Nenad Sestan, Yale neuroscientist and the lead researcher.

Ethical review boards evaluate research protocols and can reject any that causes undue pain, suffering, or distress. Since dead animals feel no pain, suffer no trauma, they are typically approved as subjects. But how do such boards make a judgement regarding the suffering of a "cellularly active" brain?

* "Midget car" in Aylett's original (i.e. Indicted to a Party: What to Do, Who to Blame). If the misquote starts to annoy me, I may change it to another nugget of sterling advice from the same piece: "Show obvious reluctance to stop kissing the dog."